Refractive error, also known as refraction error, is a problem with focusing light accurately onto the retina due to the shape of the eye. Refractive errors are corrected with eyeglasses, contact lenses, or surgery. Eyeglasses are the easiest and safest method of correction. Contact lenses can provide a wider field of vision; however they are associated with a risk of infection. Refractive surgery permanently changes the shape of the cornea.
Contact Us
About Us 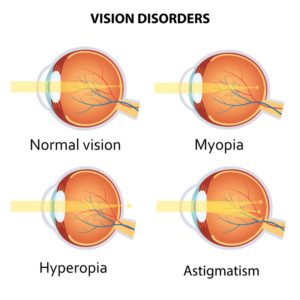 Common types of refractive errors are:

The number of people globally with significant refractive errors has been estimated at one to two billion. Rates vary between regions of the world with about 25% of Europeans and 80% of Asians affected.

In this disorder, because of long length of anterior posterior diameter of eyeball or increase of cornea curvature, the picture of things is formed in front of retina curtain and you have problem in seeing far things. This disorder that is most of the time inheritably is recognized in ages 8 to 12. In puberty ages, by growth increase, its severity becomes more and it will fix in ages 20 to 40. An important danger in this disorder, especially in severe myopia is separation of retina.

In this disorder, that is shortness of anterior posterior of eyeball or decrease in cornea curvature, picture of things is formed before retina curtain , person sees far and near things blurry, but near blurred vision is severe than far blurred vision. This disorder like myopia is most of the time inheritably and by age increase and decrease of lens adaptation power, becomes more.

In Youth, eye lens is very flexible, its diameter changes easily for seeing far and near things. After ages 40, lens becomes tighter and loses its matching capability, as a result a person can’t study and doing affairs from near distance easily. This condition named presbyopia that without other diseases it is natural. But it can be with other disorders like myopia, hyperopia, or astigmatism.

Astigmatism is a common disorder and most people have it to some degree. Severe astigmatism in most times is inheritably. Normal cornea is smooth and circle and its curvature is natural in all axis. Astigmatism is when cornea’s surface has non-symmetric curvature. In this condition because of non-symmetric refraction of light waves in different part of cornea, pictures are not concentrated on retina exactly and far and near thing becomes more blurred than natural condition. In this disorder, cornea is like baseball ball sometimes than be a circle that this situation causes that things picture created on two different points on retina.

Laser vision correction, such as LASIK, can provide a long term alternative to contact lenses and glasses.  LASIK works by changing the corneal surface.  More specifically, it alters the curvature of the cornea to alter the refractive power of your eye – reducing or eliminating the need for glasses or contact lenses.

Older techniques such as radial keratotomy also “changed vision” by altering the curvature of the cornea.  While LASIK has generally replaced RK, the basic ideas are the same; changing the corneal surface can result in improved vision without the need for glasses of contacts.